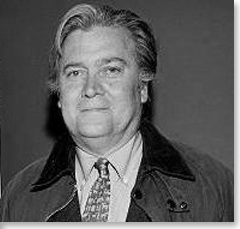 Mr. Bannon has spent 15 years in media investment banking and film financing. A former Goldman Sachs banker, he formed his own firm and sold it to Societe Generale in 1998. He has arranged the financing for numerous film producers and distributors including Newmarket Capital, MGM, Polygram Filmed Entertainment and First Look Pictures.

Mr. Bannon was Executive Producer of Julie Taymore’s directorial debut, Titus, an adaptation of Shakespeare’s Titus Andronicus,starring Anthony Hopkins and Jessica Lange; nominated for an Academy Award, the film was an official entry in the Venice Film Festival.  Mr. Bannon was also Executive Producer of Sean Penn’s directorial debut, Indian Runner, an entry into the Director’s Fortnight at the Cannes Film Festival.

From 1976 until 1983, Mr. Bannon served as a Surface Warfare Officer in the United States Navy, with four years of sea duty onboard the destroyer U.S.S. Paul F. Foster (DD964) with the Pacific Fleet.  The Foster was assigned to battle groups in the Arabian Sea and the Persian Gulf during the Iranian Hostage Crisis.  After sea duty, Mr. Bannon served as Special Assistant to the Chief of Naval Operations in the Pentagon during President Reagan’s first term.

Mr. Bannon is a graduate of Virginia Polytechnic Institute and holds a Masters Degree in National Security Studies from Georgetown University.  In 1985, Mr. Bannon received his MBA with honors from Harvard Business School.

He is a trustee of the American Academy of Dramatic Arts and a board member of Paulist Pictures. He is currently the chief executive officer of American Vantage Media, a branded entertainment, film, and TV production and distribution company.