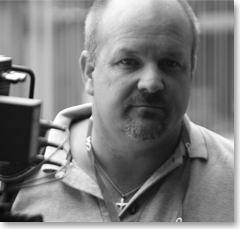 Tim Watkins is the owner and CEO of Renegade Productions. A degreed accountant from Benjamin Franklin University, he was able to combine his financial expertise with a skilled team of creative professionals to transform what was a small, boutique post-production house into a full-service agency and production facility.

Tim is co-founder of Leo McWatkins Films, which focuses on content development and co-productions of long-form programming and documentary filmmaking.

Tim is also a regular speaker and media guest on many news and entertainment outlets from the Fox News Channel to local radio.

In addition to In the Face of Evil, Mr. Watkins is the director of The Blood and the Rose, an inspiration film about the appearance of Our Lady of Guadalupe to Juan Diego in 1531. He also produced Distant Signals, a story about the history of cable television, and is currently in pre-production on the next chapter of In the Face of Evil.

His television productions include Grace Before Meals, a cooking show with a family-friendly message and Home of the Brave, a look at the heroic efforts of our military in the international War on Terror.

Renegade is a leader in consumer and business-to-business advertising. In addition to producing over 300 television commercials each year, Renegade develops print, radio and web applications for some of the biggest national clients in the network and cable industries.

Outside of the business realm, Tim is an avid participant in charitable organizations, including the National Alliance for Autism Research (NAAR). Tim Watkins resides in Westminster, Maryland with his wife and three children